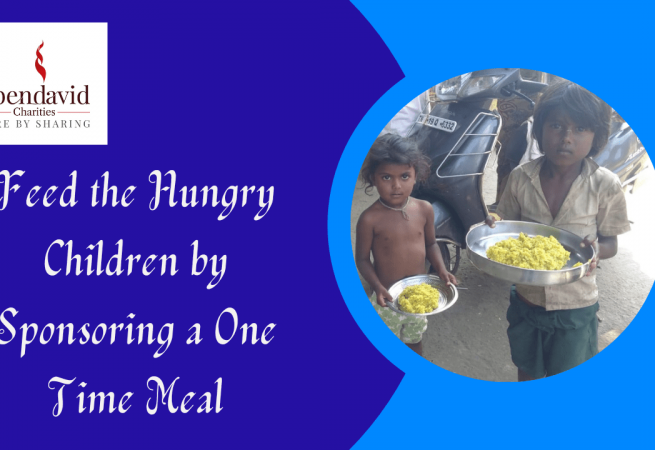 Feed the Hungry Children by Sponsoring a One-Time Meal

When asked What is Hunger? ” we seem to immediately think about the days when we skipped out on breakfast and arrived at work or school with a poor temperament. The hunger we are talking about is much more serious. It is a global issue – defined by Wikipedia as “the condition in which a person does not have the physical or financial capability to eat sufficient food to meet basic nutritional needs for a sustained period”. No matter who you are and where you come from, you will have experienced this hunger, through documentaries, posters raising awareness about hunger, and even people in metropolitan areas begging for food. Access to food, which is a human right, the lack of which is still the number 1 cause of death in the world.

According to 2021 statistics on world hunger:

World hunger statistics in 2022 point out that nearly 10% of the world population is starving, and an NHS report says that over 20 crore Indians go to sleep with an empty stomach every day. 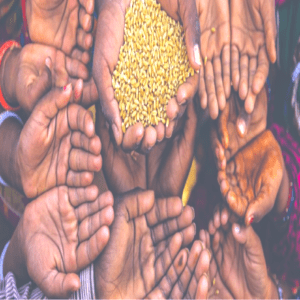 To help analyze the affected population, we can use the Global Hunger Index (or GHI) as a way to measure hunger nationally, regionally, and globally. In 2021, GHI showed that 47 countries have extremely alarming, alarming, or serious levels of hunger. India’s hunger index ranks as a ‘serious’ level of hunger, joining countries such as Venezuela, Iraq, and Nigeria with the index (Global Hunger Index, 2021).  As some food for thought, here are 10 facts about world hunger you can read on Opportunity.org that make clear why world hunger is a problem.

We cannot blame any one reason as the culprit of world hunger, since the world collectively agreed to Sustainable Development Goal (or SDG) 2, in 2015, which aims to achieve zero hunger by 2030. However, a common pattern can be noticed throughout our history. At the height of any global conflict or recession, there is an increase in poverty, and therefore hunger.

Take for example the financial crisis of 2008-09, which took place roughly the same time as the 2007-08 world food price crisis. In that period, food prices skyrocketed, the reasons for which are often cited to be major droughts (climate events) in wheat-producing countries, as well as a surge in oil prices (human events due to supply and demand, that consequently increased the price of fertilizers and food transportation). In 2022, food scarcity can once again be attributed to two common factors like the 2009 crisis: a human event (the spread of COVID-19 and the Ukraine-Russia war) and a climate event (crop failure due to climate change).

Food scarcity during world disasters, including natural and man-made, causes shocks in the economy to persist years after crises are alleviated. The reasons for food scarcity in the modern world are usually not due to the under-production of food (as most people might think), but rather due to the uneven distribution of food. This problem directly correlates to unequal wealth distribution, characteristic of almost any capitalist society today, limiting access to the impoverished and therefore reducing their means to afford that food. Here is a link to a food scarcity essay by StudyCorgi to help you understand the matter.

In these scenarios, the famous saying “the rich get richer, and the poor get poorer” would be applicable, leading to the vicious cycle of poverty – a phenomenon in which the impoverished remain forever impoverished, due to reduced economic development opportunities and poor physical and mental health, which render them trapped in this ‘cycle’. During the pandemic, India bore the brunt of food scarcity in the world, as seen through a Hunger Watch survey conducted between December 2021 and January 2022. 79% of households across 14 Indian states said that they faced some form of food insecurity, with 60% of them worried about not having sufficient food to sustain themselves.

Hunger in India is unselective, and exists amongst states from different parts of the country, with the hungriest Indian state being Madhya Pradesh, followed by Jharkhand, Bihar, Chhattisgarh, Gujarat, Orissa, and Karnataka.

The Green Revolution was implemented across regions in the Global South during the 1960s after World War II and was set to ensure that food scarcity would not be due to the under-production of food. It established modern agricultural standards such as growing high-yielding crops, agrochemicals to boost plant growth, and mechanization to increase efficiency during planting and harvesting. It was one of the first major solutions to end world hunger that lead to a widespread reduction in poverty and a new economic sector to support job opportunities with higher incomes. Later in 2012, the Food Assistance Convention was set up as a treaty signed by 14 signatories and 17 party members that promised to improve the international ability to immediately respond to food emergencies and improve nutrition levels among the most affected populations.

Commonly seen solutions to achieve zero hunger across countries include soup kitchens (which originated from the Great Depression; involve volunteers dispensing soup and bread to the poor) and food shelters (often organized in widely accessible places where people can donate food to be distributed among the poor).

Sustainable agriculture is a growing interest among Indian farmers and consumers to meet the need for food security in India, and as stated by Prime Minister Narendra Modi, is a “base for economic success”. The efforts for economic development through the spirit of the people are being led in “Amrit Kaal”, a period mentioned by the Prime Minister to be a time of new ventures by its people. Natural farming schemes such as the ‘Paramparagat Krishi Vikas Scheme’ created 30,000 clusters to benefit farmers while the ‘Namami Gange’ project aims to create a natural farming region along the Ganges River. (Business Standard, 2022)

How You Can Contribute To Our Effort

“Every small act makes a difference”, therefore you should strive to participate in charitable activities for the benefit of the poor and needy, regardless of color or religion. This is a vision of Ebendavid Charities, a Tamil Nadu NGO and charitable organization in India. When you ask yourself “How can I help end world hunger?”, you must remember that local organizations such as Ebendavid, are the ones making the most personal impact. 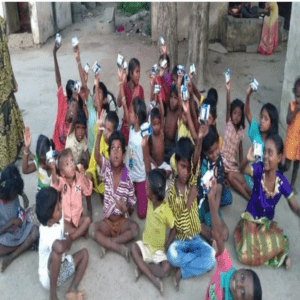 Last year, we celebrated our 15th anniversary in feeding the hungry in what has been a long journey since 2007 to lend a helping hand to those in distress. Whether it was distributing flood relief packages to affected parts of Tamil Nadu, or giving biscuits to hungry children in Kanchipuram that were funded by kind donations, we won’t stop until the next generation who are living on the streets are fed and happy.

By paying a minimum of Rs 50, you can sponsor a child’s one-time meal.

We welcome you to join us by donating as much as you can to feed hungry children in Tamil Nadu, because hungry children fail to perform so many crucial activities that are important in a child’s life which are things most people take for granted – learning at school, maintaining a healthy weight and height, and being able to develop their cognitive abilities.

These healthy habits depend on their ability to access and eat food. 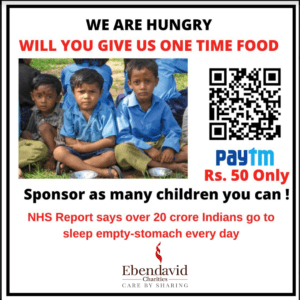 Since our donation link is online, you can donate a kind sum of money from anywhere. Please scan the QR code on the image above or click on this link to donate. Ebendavid Charities and the hungry children you will feed sincerely appreciate your generosity.