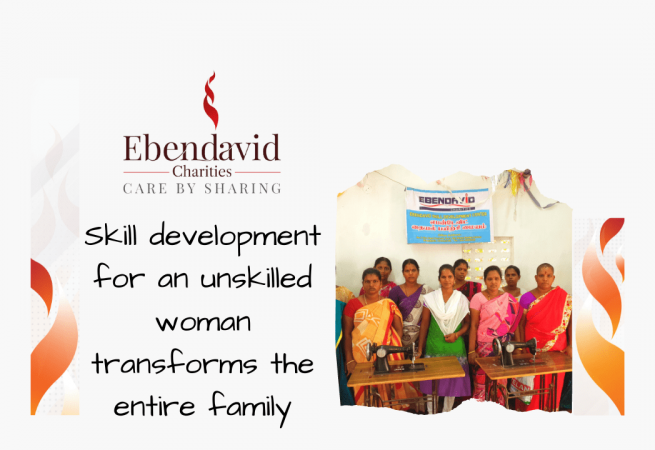 Skill development for an unskilled woman transforms the entire family

Women’s role in Life and Society

A woman’s role in life is to be the architect of society, and their role in society today is to be a part of the powerhouse for economic growth and development. While this is the motto, the reality, however, is that women, 50% of the world’s population, are simply under-utilized and undervalued in their potential to bring change.

In India’s young and booming population, 45% of women aged 15-29 are not part of any education, employment, or training, compared to just 6.5% of men. And when it comes to certain sectors of the economy, women are largely under-represented. Today, the role of women in life excludes them from being a part of infrastructure, healthcare, automotive, and information technology jobs, with this trend extending to the top leadership positions in businesses where a meager 4.7% of women held the roles of CEO in India in 2021.

What is the solution to the gender gap problem? Re-skilling and upskilling.

The meaning of re-skilling is the process of learning new skills to do an entirely different job from the current one, while upskilling is learning new skills to add to pre-existing ones. Skill development, from those that are technical, such as learning computer programming, to entrepreneurial skills, such as setting up a sole trading business, is vital in the journey to empower women, with mentors of these programs being equally important, along with the network of individuals participating in it.

One such example of a skill development program on a national level is Skill India, which is also known as the National Skills Development Mission of India. It is a campaign created by Prime Minister Modi in 2015 to transform the lives of 40 crore individuals in various industry-related careers to create a strong, empowered workforce through skill development training courses and schemes. One of the ways that this skill development program stood out from others, was that they wanted to reduce poverty in the nation, as well as instill competencies rather than qualifications.

Women’s skill development is a method of improving a woman’s household’s capacity, autonomy, and employability, and provides the independence that they need to have free mobility. As stated by Devalt, ‘skill is the bridge between job and workforce’ and for women to participate in it, there must be a greater range of courses provided to specifically target them, especially courses that enable them to break into typically male-dominated fields, which require analytical, logical reasoning and inference skills, where pay is higher and jobs are more secure.

UNESCO believes that skill development is essential for women’s empowerment, by using education as a tool to serve this. According to their research, there are still millions of girls who should be in school but aren’t, and adolescent girls are found to be the most vulnerable to conflict, poverty, and discrimination. They also support life-long learning, a type of self-initiated education focussing on personal development. Examples of this are internships and apprenticeships, both of which help teach real-life skills to apply in the workplace. Internships are short-term stints that involve the individual applying their skills to complete a task, while apprenticeships last much longer and involve more classroom-based learning where individuals have the opportunity to shadow a senior member and learn alongside them, working towards a professional qualification that can help land a full-time job.

Furthermore, this lifelong type of learning aids in individuals feeling fulfilled and connected on a personal level, increasing their chances of meeting skill requirements in job descriptions and succeeding at a job on a professional level.

Since life-long learning is incredibly beneficial, why isn’t it all the more common? The reason is that its informal learning environment means that families that have a poor culture of learning, challenges such as dyslexia (which increases the difficulty of reading and speaking coherently), or simply low self-esteem, make it unlikely for women to sustainably continue educating themselves.

This is why skill development also serves a secondary role – the role of offering the sustainable development of skills, through an encouraging environment that boosts individual confidence. By keeping a smart company that is knowledgeable in a field, as well as starting a personal venture or project of their own, women are more likely to remain interested in a topic and continue pursuing it within and beyond it for the rest of their lives this way.

Lack of Resources for Rural Women

However, there is still a major barrier to entry – one that sets the hurdle higher for some women than others – which happens to be the place they were born.

Rural women in India are disproportionately disadvantaged by their lack of resources, and confinement to gender norms, which keeps them continuing to work in low-paying jobs. They lack literacy and field knowledge, preventing them from seeking better opportunities and job progression in the city.

SEWA, which is the Self-Employed Women’s Association, is the largest organization of informal workers in the world, which promotes the rights of low-income, independently-employed female workers. Its members don’t want charity – they want immediate work, and this voice was no louder than during the pandemic when hundreds of its members lost their livelihoods and often had to cut down on spending, such as by removing their children from school. Women play vital roles in the agricultural industry and form the backbone of rural economies. Because of a lack of job security, they often don’t have any other source of income to sustain themselves. 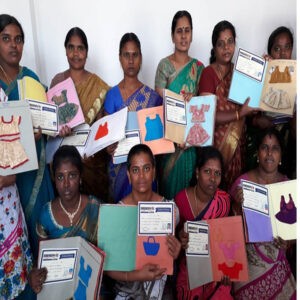 This is why we, Ebendavid Charities, encourage you to donate to fund our UpSkill Center, a center specifically designed to teach skills and courses for ladies, that has a tremendous impact on local areas in Tamil Nadu, transforming the lives of nearly 48 families a year.

As a student, you may get involved in volunteering for us, by sharing any skills you know and would like to teach underprivileged women, such as tailoring, MS Office, tally software, and computer training.

Please consider donating Rs. 2,000 a month or Rs. 10,000 for a one-time payment to help us set up and manage our UpSkill Centers. We work tirelessly with our Village/Slum Partners to ensure that the women who benefited from it are from low-income backgrounds and our dedicated Field Officer regularly assesses the skills of both the teacher and the students. We and the women you are financially supporting will be greatly indebted to you. Thank you.